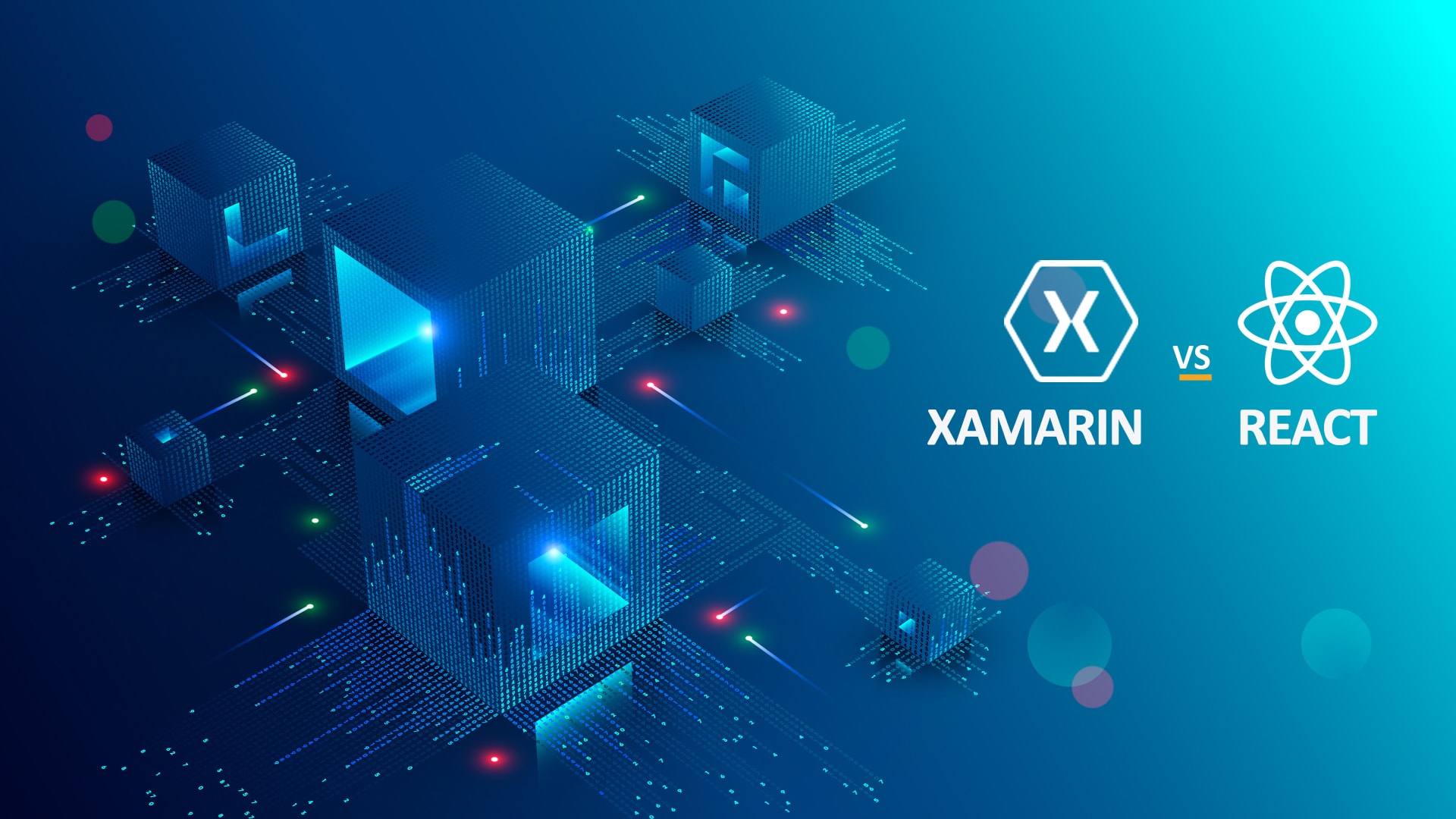 Which Framework is Best for Cross-Platform App Development?

First launched in 2011, Xamarin is a cross-platform application development toolkit that allows us to produce native Android, iOS, and Windows apps with unified and branded UXs.

Xamarin works through the Mono framework to communicate with the Application Program Interface (API) of common mobile device functions, leveraging a shared code to forge compatibility and usability across multiple platforms or operating systems.

For C# developers, Xamarin is an easy transition, as it allows developers to build robust applications using the C# programming language that runs on .NET Common Language Infrastructure (CLI).

What is React Native?

Like Xamarin, React Native is also a cross-platform mobile app development framework that allows developers to build mobile applications for Android and iOS devices with one tech stack.

The Xamarin vs. React Native Debate

It’s pretty well-known throughout the mobile app dev community that Xamarin and React native are the two main powerhouse frameworks used to create some of the most popular mobile apps used today.

However, when it comes down to choosing between these two frameworks for mobile app development, one important question comes to mind - do you prefer to use C# or JavaScript?

If you prefer C# as your programming language, then Xamarin is the right choice for you.

If you prefer JavaScript as your programming language, then React Native is probably your best bet.

Considering that both toolkits are entirely viable options for cross-platform app development, we’ll shed some more light on the advantages and disadvantages of Xamarin and React Native.

The Demand for Cross-Platform Development 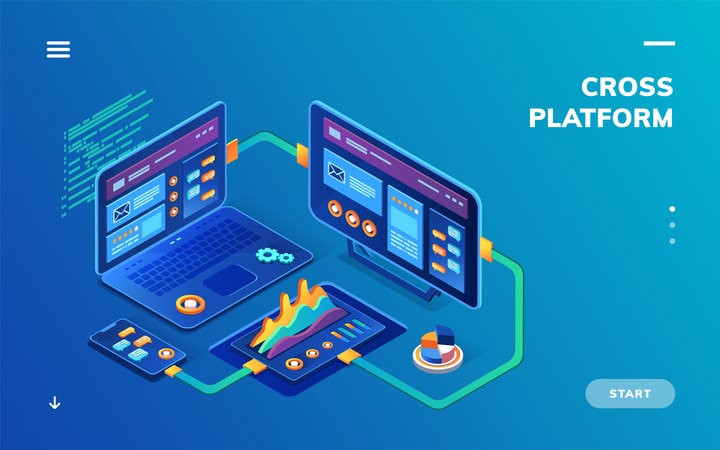 Not having a mobile counterpart to your legacy could mean a death sentence for your business.

As consumers, we prioritize accessibility and convenience. We reward service providers who deliver apps that function equally across multiple platforms, meaning each Android user experiences the same user interface as the Apple user engaging in the iOS version.

As business owners, we are forced to accommodate the growing interconnectivity by becoming an integral part of it, channeling our brand through every platform available.

Call it “streamlining,” “unifying,” “dismantling silos,” or whichever trending phraseology you’d like. The point of the matter is that cross-platform accessibility is an end-user expectation that is here to stay.

The Xamarin Elements That You Should Know

The Xamarin application development platform compartmentalizes into several different elements. These elements contribute to the shared codebase, allowing you to navigate across multiple channels and minimize development.

The React Native Elements That You Should Know

React Native is also undoubtedly the winner regarding its availability-level since it’s free!

With React Native, developers can use the framework and all of its libraries at zero cost!

Xamarin has a free version as well, although it boasts a very limited feature-set and not as many resources as React Native.

Also, although the platform itself is available for free, using the Visual Studio comes at a cost.

React Native leverages one of the most popular and commonly used programming languages in web development - JavaScript.

So, in turn, those with extensive knowledge and experience with using JavaScript will have no problem developing a mobile app using React Native.

Xamarin uses C# programming language and the .NET framework. Xamarin also has a lot of support from Microsoft, providing a robust set of tools, including debuggers, native platform integration, and a rich editor.

When it comes to the two app development frameworks’ underlying technology, it’s really a matter of preference. One is not necessarily better than the other in that respect - it’s like comparing apples to oranges.

React Native’s Live Reload feature allows web developers to see the effects of the code changes. Being able to view these changes in real-time offers a considerable advantage, especially in terms of time management.

React Native also has a Hot Reload feature that allows the app to keep running even as developers inject new file versions. This feature is especially useful when tweaking the UI since changes can be implemented without doing a full reload of the app.

With that said, Xamarin has a much friendlier development environment. It allows developers to write code that’s specifically designed for an iPhone app on Windows and compile it for Mac.

Xamarin leverages Visual Studio or XCode IDEs to design Mac applications, both of which are significantly easier to use than that of React Native.

According to a StackOverflow survey, React Native came to be the 6th most popular framework and was also voted as the 8th most beloved cross-platform application development framework on the market.

Additionally, React Native came in 3rd place for the most wanted framework.

Compared to React Native in the voting polls, Xamarin didn’t fare quite as well.

Xamarin was voted 10th most popular cross-platform application development framework and 11th for the most wanted framework.

Without a shadow of a doubt, developers chose React Native as the better choice.

Typically when a product or service is popular, it’s an excellent choice that consumers enjoy.

When choosing cross-platform app development frameworks, we’ve found that the best metric for measuring which is best would be to look at online search trends.

Online search trends provide us with information about what developers want to know and learn about. 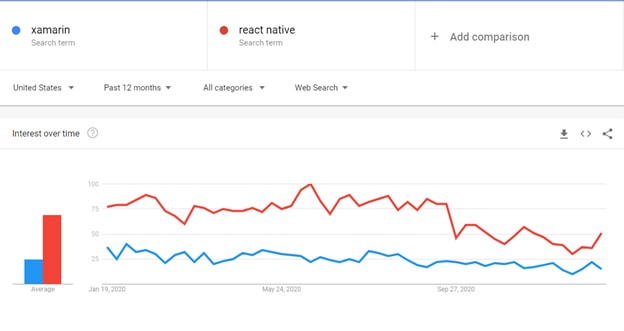 As you can see from Google Trends, React Native is a much more popular choice than Xamarin. From this data, we can infer that more developers will be leveraging this framework in the future.

React Native vs. Xamarin: A Question of Allegiance

The React Native vs. Xamarin complex is no stranger to the coding landscape. There’s a lot of debate over which platform outperforms the other, and we find the discussions plastered over community forums and subreddits.

It’s a polarization that really boils down to a question of to whom you pledge your coder allegiance to - C# or JavaScript.

So, we’re saying here that the React Native vs. Xamarin debate is a misnomer for the overarching C# vs. JavaScript debacle that receives loyalty for each side.

Both are open-source frameworks that support cross-platform development and accelerate time to market for brands looking to breach every consumer channel.

Xamarin is the wise and cultured grandfather, while React Native is the tenacious, high-energy new guy with a lot of charisma.

There are perks to both archetypes, but trendy software tends to have holes no one’s managed to patch up.

React Native is agile, but Xamarin is reliable.

When bringing a mobile application idea to fruition, the first decision is whether to develop natively or cross-platform.

If the mobile application is not inherently complex or will not be released to multiple platforms, native development may be the correct choice.

If the application will be released on multiple platforms, and if time and resources are of the essence, then developing an application using Xamarin has some definitive benefits.

Nevertheless, contacting a professional software development specialist will help make the decision easier. They can suggest the applicable standards and efficient practices needed to develop a mobile application for any device.

This depends on the intended use, audience, and functionality needed for your business, rather than merely suggesting using the newest code tools available.